I've been kicking around re-enactment / living history circuits for many years but have been absent from public events for about 15 years or so. ( Mostly working in education since then. )

Looking to get back into one of the big societies and still have most of the kit I used for living history craft displays in the last millennium ( I appreciate that much of this will need re-evaluation to see if it still passes muster.)

My memory of such event in the past is much sitting around and the back ache that used to cause me. ( Had an RTA years ago that added to the problem. )

Much of the problem came from not having a chair with a back to it. Sitting on chests is all very good for rowing or if you're not stuck in the same place all day but not comfortable when hunching over a craft display if you're the wrong side of 50.

I'm aware of the chair ( or possible commode ) found on the Osberg ship but wondered if anyone could point me towards other reasonable sources or acceptable solutions for this problem?

I would be especially grateful if it was something that could be folded up or taken apart for transport.
Wayland.

Chairs seem to be associated with relatively high status throughout the Saxon/Viking period and into the high medieval. Low- and mid-status was linked to sitting on the floor, on a stool or bench (or "form"), which is hardly conducive to a healthy spine.

The chair at St. Paul's, Jarrow, has long been referred to as "Bede's Chair" and its shape is vaguely indicative of that early period. Analysis using carbon dating of the oak shows that it was actually made after 1300, which demonstrates how local traditions can be very wide of the mark:

Thanks for that, it does seem to be a bit of a gap in the evidence, much like tables.

I guess that wooden chairs would not survive well in most dwellings, which may account for the lack of evidence outside ecclesiastical settings. Sounds like you might be well served then Brother Ranulf.

As for status, most of my kit is rather rich, which I usually put down to being a successful trader so that shouldn't be too much of an issue. ( I could always say I nicked it from a monastery I suppose.)

The closest I have come up with so far are the Oseberg "chair" as already mentioned (Although some people think it may have actually been a commode.)

From slightly later we also have the chair from Tyldal Church, Østerdalen, Hedmark. dating to 1150-1200 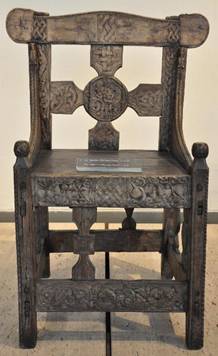 Other than that it seems to be the ubiquitous "Half Room" Sea Chest or three legged stool which seem to be commonplace (Viking to Crusader p245 Cat.No. 70)

I may just have to make or source some kind of hybrid and then argue the case for old duffers like me to sit in unless anyone knows of anything better.
Last edited by Wayland on Fri Apr 10, 2015 12:05 pm, edited 2 times in total.
Wayland.

I also found a pinterest page that may be useful for you: https://www.pinterest.com/beciafab/romanic-furniture/

It includes this one which they say is 8th Century with later arm rests.

I had dismissed the Roman Curule chair as far too early but perhaps I should rethink that.
Wayland.

I am an Anglo-Saxon coin researcher revising a manuscript on the coinage of Ecgberht and Eadberht. You have referenced that "Bede's chair" at Jarrow has been radiocarbon dated to the 13th century. I wish to cite this reference, but cannot find a citable source online. Do you have a reference for this?

A constant bugbear for anyone using the interweb for serious historical research is the problem of useful web pages being there one minute and gone the next. The information came from a scientific paper published online, covering the carbon dating of various medieval pieces - sadly I did not download and save the report, simply making a mental note regarding the chair. It has long been regarded as suspect, however: see the section on "thrones and chairs" in https://archive.org/stream/englishchurc ... a_djvu.txt

and page 8 of this much more recent document:
http://www.durham.anglican.org/userfile ... w%2004.pdf

and an assessment by the British Library:
http://www.bl.uk/onlinegallery/onlineex ... 13000.html

These give 14th century as "probable" date, but I am certain that the scientific analysis referred to 13th century.

So, frustrating as it is, I can not currently provide a citable source or reference. I have contacted the parish office at St Paul's, Jarrow to see if they can help - I will keep you posted if/when they respond.
Brother Ranulf

Just to update on this:

I first contacted the staff at Jarrow church, asking for any information regarding the dating of the chair. Then I contacted the Bede's World museum with the same request. Some time later I contacted David Simpson, an historian specialising in that part of the country who has written of the chair being "14th century".

I have received no response from any of them, so I am only able to speculate.

Perhaps there is a concern about possible theft of the object, as with many Church valuables; perhaps the chair is only a modern replica (like the famous Durham sanctuary door knocker) and the original has been mislaid, destroyed or stolen; perhaps its true date is being suppressed in order to perpetuate the myth of its connection with Bede; perhaps it always has been a fraud and there is reluctance to admit it. Answers on a £50 note . . .
Brother Ranulf

A folding chair (pics look like directors chairs) was found at Prittlewell (Southend). Info on Wikipedia or watch the Time Team episode, 2004 on the Ch 4 website