by Angie
I am making an 18th century officers or posh ruffle shirt and was pondering the question of what the best buttons woud be to use- pewter, brass,horn, would they have had sleeve buttons (the ones joined a small s clasp thingy). Any help would be appreciated.

by Grymm
Proper officer or a Jaco' ? =oÞ
Small Dorset wheels would be pukka or do button holes either side and use link buttons(the ones joined a small s clasp thingy) that way they can be removed and they don't get busted when the shirt is being laundered

This chappie has linky buttons 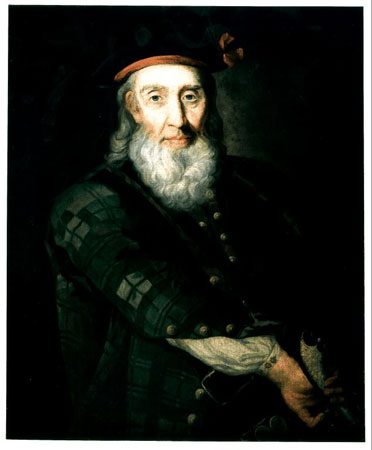 Means you could get a silver set made, to match yer snuff box.......

by Shadowcat
Do you have a date for that picture sir? He seems to be earlier than the earliest visual I have for linked buttons, which is about 1720. (A naval chappie at Rougemont,House, Exeter, as I recall.)

He asked me to make a shirt so I make a shirt. I'm not sure what he wants to use it for, posh civvi and officer I guess.

Can you buy the linked buttons at traders or will I have to get some on line?

I think if you have some suitable buttons you can get links from bead shops. I'm not sure if this has them, but I am almost certain I've bought them from somewhere similar.