by Tiamat
For a gig in the summer of 2012, I'm looking for some napoleonic cavalry uniforms. We haven't decided on the unit yet, but it's preferable to be recognizable to a broad public, so we're aiming for either the generic red uniforms or the cavalry blue. I've been looking into both 1st Dragoon Guards and Prince of Wales' Own Royal - both seem suitable, but I am open to other suggestions. I prefer costumes that are not overly frilly/complex, although I realize that this might be hard given the fancy dress code of the time.

I'm looking for suppliers of uniforms, either in the UK or abroad, who supply reasonably authentic stuff, for a reasonable price.

have a look at ARK clothing. Kerry Baker does good uniforms to suit your choice at reasonable prices.

by Tiamat
Thanks, Ron! Would you happen to have a link or contact information?

by Born 2 Late
Hi Tiamat,
Bit of a shameless plug:
www.Born2late.co.uk
Supplier of all sorts of Napoleonic leatherwork and accoutrements. I have a lot of experience in Napoleonic cavalry equipment (being a member of the 7th Hussars).
If you don’t find what you want on my website just ask

by Andy R
Your local group is http://www.envedette.org

If you are interested in Dutch Hussars, they are your best way forward. They also have links with the current regiment which if I remember right is run by Harry Kampen who used to run the 14eme Cuirassier back in the day.

If you are interested in a British unit, then you may want to steer clear of the heavies.

The heavies had specific lace which has to be ordered as a bespoke batch unless you know someone who can weave it for you. (if you are looking at teh 1812 uniform, and bearing in mind we have Waterloo bicentenary coming up in 2015 just over the border from you) The helmet is a pig as well.

Pre 1812 the heavies may be easier as the lace is plain.

The most dificult part with the hussar dress is the barrel sash Shakos and busbies are relatively simple.

Pre 1812 light dragoons are not too bad, but the tarleton can be tricky to source.

I had a couple from Solent Saddlery/Cavalry Workshop that really didn;t cut the mustard as the level of detail isvery poor for the price (wrong colour metalwork, bearsking crest just folded over carry mat with was bolted on to the skull with inch proud bolt ends protruding in to the skull, and wrong general construction of the skull. I found a better supplier is Hussar Saddlery in the states who cost half the price

But I would work out what you want to do and for what reason before you invest in anything inorder to maximise the use you can get out of what you buy.

We have a British Light Dragoon in Holland who is not invited to the dutch Cavalry events because he does not do Dutch cavalry.

by Redders
I can also help with any of your leatherwork and accouterment needs.
I'm currently working with some Dragoon and Hussar Regiments on various leatherwork projects.

Feel free to drop me a line if you require any further details.

by Alexander
Andy R: Thanks for linking us!

Tiamat: I did wonder about you choosing a British unit, too. Of course, that gives you a larger scope of battles to participate in. Our regiment has been raised November 1813, after all. And don't underestimate the cost of portraying napoleonic troops! We might not have fancy armour but we do have all kinds of equipment, nicely put down in regulations. And all those little things do add up.

You might want to take a look at the forum of the NAN, Napoleontische Associatie der Nederlanden. This is an umbrella organization for all the Napoleonic groups in the Netherlands. The site is http://www.nanweb.org

by Andy R
A pleasure Alex, you are fine chaps to fight with or against.
(with Slyvia as an honary chap)

by Alexander
Thank you, the pleasure is all ours! And oops, I took a second look at your link: That is the old website, now defunct. Please have a look at the new site Sylvia made: http://www.envedette.nl/

by Dixie
Have you considered this look? 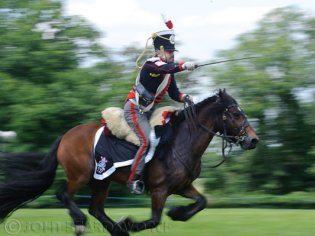 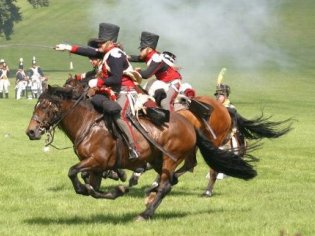 The light dragoons were the less fancy, more fighty arm of the British Light Cavalry

At Waterloo it was the Light Dragoons of Vandeleur's Division and Arenschildt's Division who supported the heavies, and continued fighting till the sun went down mopping up the remains of the final assault by the guard (and very nearly the 1st KGL Hussars of Vivian's Brigade as they returned to the battlefield following Sir Hussey's grand tour of where the enemy used to be)

by Andy R
Just found this as well.

The Light Dragoons supported by the 18th Hussars at Waterloo 2010.

Our Dutch member had dropped out at this point as had many of the allied cavalry as the horses were a little suspect to say the least.

But in the lighter blue at the front on the left of the line are the Dutch 6th Hussards with Sylvia leading I think?
(Is that you Alex in the dark blue jacket and light blue cap?)

by Mark Griffin
I'd just like to point out that there is no truth in the rumour that the heavies are not so called due to the preponderance of middle aged chaps carrying too much weight.

In the word of the popular ballad of the time though...

Griff
1RD and others
soon to be 2D on off days, childrens parties etc.

Andy R wrote:(...)
But in the lighter blue at the front on the left of the line are the Dutch 6th Hussards with Sylvia leading I think?
(Is that you Alex in the dark blue jacket and light blue cap?)

Can't be me, I wasn't present at Waterloo 2010, I joined En Vedette in November 2010. My first event was the NAN winterbivouak in Februari 2011.

by Ronco
Tiamat, sorry about the delay in replying, but to get back to your original query about uniform suppliers, Kerry Baker 07752 445359 or best
www.arkhistoricclothing.co.uk.

Alexander wrote:Can't be me, I wasn't present at Waterloo 2010, I joined En Vedette in November 2010. My first event was the NAN winterbivouak in Februari 2011.

Ahh, must be Dirk then - I think this was his last event with them, but Derk and Sylvia split off as he wasn't giving any orders during the battle which is why they ended up with us.

I'm assuming there is a nightclub doing free cocktails off in the distance on the right.....