A Gallery of Helmet Adornments and Crests

A Gallery of Helmet Adornments and Crests

We all love to show off our top end clothing and equipment in full pageantry.

Add your helmet crest, too.

I take the liberty of adding Bonnacon's crest to the Gallery.

I like the inventive approach to the "flames", Sir John, and the impressive mantle: obviously, a great deal of work has gone into this.
Ubi bene, Ibi patria

thanks It took a lot of thought and help from a friend to make the beacon. but all good fun. glad someone's started this thread be nice to see what other people have made
http://www.paladins.co.uk

sadly tristen wont be making it, I am playing with my band all the weekend its a shame I loved that show mite try to go to rochester (SP) not sure yet really depends on the cash flow
http://www.paladins.co.uk

Well it is a crested helm...


That's a cracking helmat. The pattern and brass work
is really nice
The Swords Of Mercia Society
http://www.swordsofmercia.co.uk/
The Exiles
www.the-exiles.org.uk/
Top

Ah well thank you, it's one of only two copies of the Valsgarde 8 helm done to a reasonable standard of reproduction that I'm aware of.
WORKMONKEY: The Wilderness Years.

it IS very nice, i put a dent in it

Looks hideously expensive ?
Not my period so tell me about the Valsgarde 8 helm please!
Vivimus vivamus!
Top

Was wonderfully cheap. Made by Thorkil, this was the first helm with full decorative plates that he made, I gave him alot of the specifications and diagrams so I got it for a good price. I think he's selling them for twice what I paid for it, I got it for just over £600 with shipping.

It's very much in the same vain as the sutton hoo helm, as you can see when you compare the sutton hoo panoply with contemporary swedish ones, there's alot of similar themes and designs in the artistic elements (crests,plates,eyebrows etc) such as birds of prey, dragons, men on horseback etc. It was found at Uppsala in Sweden in the 1920's I think, along with several other very high status graves which probably represented the local royal family from early to mid 6thC AD with the Valsgarde 8, upto I think the 11th C AD, there were several helms of this type of design found at the site, and more at the Vendel grave yard nearby, they're all constructionally different, some have full mail curtains like mine, some have rear mail curtains, and some have metal strips at the neck, the way the bowl of the helmet is constructed is usually unique to the individual as well, the designs are also different on the plates, ranging from similar themes like men on horseback riding down falling warriors to bare chested men fighting bears. Some only have interlace patterns on the plates, If the designs on the plates had some kind of individual symblism it's lost on us but they're likely pagan heroic stories or symbols, but nearly all of them feature the spectacle type features you see on mine. The look of this style of helm with the mail curtain and spectacles is very close to some of the eastern roman heavy cavalry you see in the late empire, seems likely that a group or north germans saw eastern heavy horse in action and how devastating it was while serving the empire then decided to take the idea home, I think the idea of horseback combat was very important to these people, not only because of the amount of very nice horse harness gear that's found in the graves but also because of the amount of horse warrior symbolism on the helms. In this way we see a stark difference from these earlier scandanavian warriors from the later Anglo-Saxons and vikings, who seem to have only used Horses to getting too and from places.

This is the original

This is the repro

Rene d'Anjou's treatise on The Tournament, showing the contestants' helmets with crests display (it opens in colour)

Two splendid crested helms, Rod. I reckon it must be Australia as the sun is shining.
Ubi bene, Ibi patria

Did it hurt when the crow flew into the back of your head?

by the way I'm really jealous of your armour, it looks great
Top

These look great! Where`s your one Mythos?
Top

Actually, my crest is the very first one shown under this discussion heading.
Ubi bene, Ibi patria

Re: A Gallery of Helmet Crests

More medieval crests at http://larsdatter.com/crests.htm -- but here's my friend Kevin's. 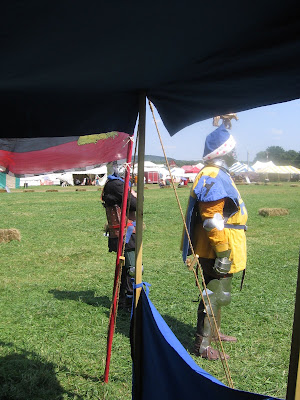 (Sorry, that's the best photo I have of it; it's a golden bear on a cap of maintenance. More photos from that particular tournament are up at http://picasaweb.google.com/StrawberryK ... lePelerine too.)
Larsdatter.com - follow on Facebook or Tumblr or Twitter
Top

Amongst the contemporary pictures illustrating crests, there has to be the most ridiculous one ever produced...or perhaps not. One wonders if the bird was alive.

I know this is not a crest but it's close(ish)!

The best morale exists when you never hear the word mentioned. When you hear it it's usually lousy
Top

I am constantly amazed at how much effort we re-enactors put into our pastime and your helmet decoration shows just that, Renau, along with a degree of skill in achieving such a good result on what amounts to a very difficult decoration surface. Thanks for that.

In recognition of the fact that the topic has widened somewhat from my original posting, I have changed the header for this thread to incorporate all helmet decoration.

I hope people will continue to share their efforts and show us all their wonderful creations.
Ubi bene, Ibi patria

Is that what is sometimes called the Sigurd Helmit?
Top

HI
Thats strange Mithos cause i thought your banner was black and white with a lyon.

Have you Changed your colours and crest?
cheers
Top

If of course like me am not good at making crest you can get it done be a Professional I met this guy at a Prince`s trust dinner his name is Ian G Brennan he has been a Heraldic Sculptor for over twenty years, as you can see by the pics below his work is very good and the waiting list isnt very long he quoted me for my crest about 8 months.

Nice one John! Would you put his details here? Or PM.
Ta!
Eurototty reporting in for duty!
Top
Post Reply
84 posts